It is late.  I should be sleeping, especially for training purposes, but I feel compelled to write about a recent race.  On Saturday night, I participated in the 16th Annual Arlington County Police Fire and Sherriff’s 9/11 5k.  If I am not mistaken, this is my third time participating.  I always enjoy this race for several reasons: first, because of my running I have made several friends in the law enforcement and first responder community; secondly, it helps me to remember part of the reason I came to Washington, DC. 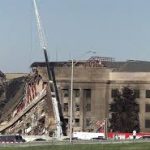 On September 11, 2001, I was entering my junior year at the University of Missouri-Columbia.  I had just returned three weeks prior from my first internship in Washington, DC at the Department of Labor’s Office of Disability Employment Policy.  During that summer, I found my independence, fell in love with our nation’s capital, and started on the path of my professional career.  That day, I woke up early to work a few hours at an on-campus job I had at Disability Services.  Sitting in my boss’s cube, I heard someone come in and say, “The United States is under attack.”  I immediately ran out front.  I felt sure this person did not know what they were talking about.  We ran across the hall in Brady Commons to a bowling alley with the big screen tv, just in time to see the second plane hit.  I went home to my dorm immediately.  I just wanted to be home with my friends.  By this time, the Pentagon was hit.  I was dialing my cell phone frantically, but of course I could not get through.  I turned on the tv to Tom Brokaw, a person who I watched literally for three days.  My roommate and I never turned our tv off during that time.  I was alone in my room when a story came on where someone had to leave behind a person with a disability in one of the towers.  Just then, a friend of mine, a wheelchair user, knocked on my door to see if I was ok.  Like most people that day, I just broke down.  We cried together, and then somehow, I composed myself and went to class.  Why?  I was supposed to have a speech that day, and I had prepared it the night before.

When we arrived in class, the teacher immediately said that if anyone needed to go they could. I already knew I was not able to reach anyone, so I stayed.  He said we did not have to give speeches that day but if anyone wanted to go they could.  I stood up, not because I wanted to go, but because I was already there, and was so worried about friends who had not yet checked in, in a pre-Facebook era, that I wanted something else to occupy my mind.  I cannot remember what the speech was about, not one word I said in it, or frankly, much else from that day, but I remember each of the moments when one-by-one, my friends and colleagues checked in with me as soon as they were able.

The next summer, I returned to Washington.  I worked in the Pentagon.  The desk I used was empty because the woman who used it before me was caring for her husband who had been injured in the attack.  She left in a hurry, and her calendar was still on September.  Once I found this out, I tried to focus on doing my work, and leaving minimal impact on her space out of respect.  People asked me if I was scared to work in the building.  I was not.  I felt strongly it was my way to serve.

On that dark day in our nation’s history, many of the first responders of Arlington County ran toward the fire, not away from it.  For these reasons, and also because of their unwavering support of my running journey during the past five years, it is always important for me to do this race.  Some of these officials have provided individual course support for me as I pursued a stretch goal, others have enforced road closures or provided vehicle escorts when needed.  It is because of them that I am even able to consider the possibility of running a marathon.  It is my honor to race in service to them as they have served to my protection and our nation.

Last year at this race, I had just returned earlier in the day from filming a segment for Harry Connick Jr.’s talk show “Harry,” but I could not talk about it yet.  That evening I met someone who would snap my picture and become a close friend.  This year, she served as my course escort and did the race herself for the first time.  She will be key member of my marathon support team.

Earlier in the day, I had done 6 miles, and wrapped up with the race for the last 3.1, because there was a 9-mile run in my training plan.  When people asked why I looked beat after doing only a standard 5k, a member of my team chimed in stating simply, “Because she didn’t do 3 miles, she did 9.”  Sometimes, a race is more than just a race.


Warning: count(): Parameter must be an array or an object that implements Countable in /home/customer/www/jamierunstheworld.com/public_html/wp-content/themes/wizard/single.php on line 192

I am so fired up…literally.  Today I went for my first official training session at Fit...

It’s Just Wednesday Right? Today was so tough.  How many miles did ...

Yesterday I did my first long run of marathon training – 7 miles.  I will not lie.  It...

Follow. Connect. Race with me.
If you want to learn more or follow along on my journey, connect with me.
I'd love to hear from you!
Photo Credit for Four Courts Four Miler, Clarendon Day, Clarendon Day 2, Crystal City Twilighter, and Parkway Classic photos: Swim Bike Run Photo
All other photos © 2016 Jamie Watts. All rights reserved.
Please contact Jamie for permission to use any photos.